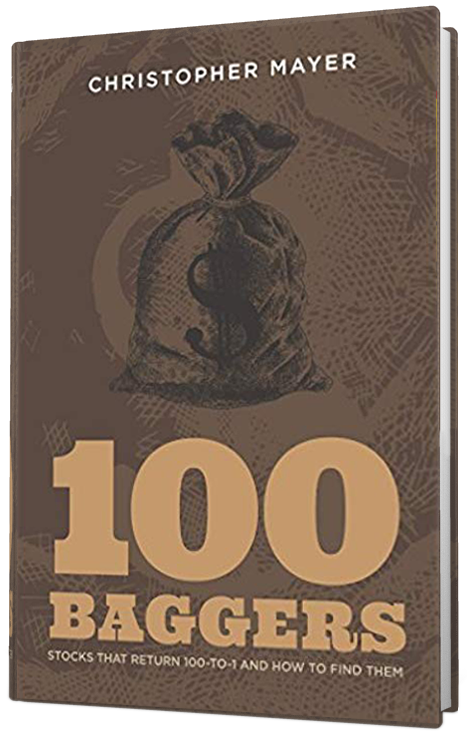 Hey! my book review of Christopher Mayer’s “100 Baggers : Stocks that return 100-1 & how to find them” now features online on Outlook Business ....just also happily observed that Stock Select for 2016 published in December 2015 is trending  online as the No 1 most popular read on Outlook Business this year! ….surely because  Stock Select for 2015, Shemaroo @ Rs  159 given in December 2014 has rocketed over 100% inside a year & a half to current Rs 325+ levels …quite aware that if this year’s Select does not Click in the years ahead that ‘100 baggers’ will be read without the 1!

For Full Flavour do check out my full review produced verbatim below :

“You make more money by sitting on your ass”

The author Chris Mayer could not have been more blunt in quoting Fund Manager, Martin Whitman

My own experience of 100 Baggers leads me to pat Chris on the back. To give you some sense  my three 100 Baggers Wipro, Mercator & Matrix Labs (now delisted as sold to Mylan) on which I had reinforced my credibility and standing had returned  respectively 38700% inside three years, 12000% inside 5 years and 10000 % inside 4.5 years. But sadly not all took the full ride! It’s like I confess at Training Workshops is akin to Boarding  a Train from Mumbai Central to Ahmedabad  but getting off at Borivali!

Make no mistake! This book by Chris Mayer is not  for those who seek  Instant 100-to -1 multi-bagger Success by investing in Stocks. Such 100-to-1 odds are available real time at Wealth Destroying Casinos round the world!

Chris dedicates his Book to Thomas W Phelps, the first author of  the first book on 100-Baggers

His inspiration to pen this book trails back a few years to  a Conference in 2011 where the great Investor, Chuck Akre  made mention in his address of having read in 1972 the  Barron’s Reviewed  Book ‘100 to 1 in the Stock Market’  by Thomas Phelps which focused on compounding capital. Legendary Investor Peter Lynch talked of ten baggers but here was Thomas Phelps talking of 100 baggers!

“The key is not only finding them, but keeping them”,“buy right and hold on”. These are nuggets Phelps summed up in his book. Phelps had added “ Investors too bite on what’s moving and can’t sit on a stock that isn’t going anywhere. They also lose patience with one that is moving against them. This causes them to make a lot of trades and never enjoy truly mammoth returns. Investors crave activity, and Wall Street is built on it. The media feeds it all, making it seem as if important things happen every day.”

100 Baggers is a metaphor for Big Winners with Chris detailing how to spot them early on rather than be invested in sleepy stocks that go nowhere. He does admit there is no magic formula and it’s not easy to screen potential winners.

Interestingly Chris was not interested in success stories of Market Wizards like Jim Rogers, Paul Tudor  or even  Nicholas Darvas as he found their stories freakish and their process for enormous gains not replicable. In fact he thought one would be ruined if you followed them.He also realised that there were many ways to make money other than being just indoctrinated to the Benjamin Graham School of Value Investing best exemplified by living legend Warren Buffett

He is impressed by the great Investor, Chuck Akre who, far away from the frenetic pace of Wall Street,  follows the three legged stool approach of identifying companies that always have a historical compounded value of share at high rates and who’s highly skilled management always treats shareholders  as partners and most importantly & has a business that can reinvest free cash flows to earn sustained above average returns

The cornerstone philosophy  for identifying 100 Baggers is to Look for Companies with sustained High Returns on Capital. As Charlie Munger of Berkshire Hathaway  reiterates that even if you invest in such a Company at an expensive price it will work out fine. Conversely if you invest even at a discount in a Company consistently  returning low on capital there will not be much difference in your low returns. A PEG Ratio is a handy tool to gauge if Relative Valuations are in sync with Earnings Growth

Your Real Test of Conviction and Temperament comes when you’re holding a Stock that appears to have gone bad but then goes on to become a huge Bagger. Warren Buffett’s Berkshire Hathaway  has been referred to in the Book to emphasise this and much more. It rose from US $8 in 1962 to US $80 in 1972. Impressed  and well advised by a friend, one picked it up at US $80 only to see it sink 53% to US $38 by 1975 while the S & P 500 had dropped only 14%. One would have dumped it and cursed the friend! However in 1976 it rose from US $38 to US $94 and by 1982 it was US $775 on it’s way to levels of over US $220000 now ! In fact from 1965 its risen 18000 fold with US $10000 becoming US $ 180 million in 50 years. Chris refers to a new interesting book by Elena Cherkova on this phenomenon & her reasoning that it was the 37.5% leverage on capital through Insurance Float that remains the key as it leads to effectively borrowing at negative rates of interest when Premiums exceed the Claims & the gains on investing the Float are yours to keep.

Chris highlights the Coffee-can Portfolio Approach to protect the Investor from himself and to resist selling to accumulate fortunes and not be worried about ticker tapes and anxious moments watching  blinking stock terminals and ups and downs in the market and sweating day to day or month to month on your portfolio value. Pick a compelling story or Leader or Country and be willing to risk it all in your Coffee Can. Chris illustrates this with how in 1987 equal amounts were invested in hi-tech and bio-tech companies that held great potential. However 9 sunk and only Amgen returned 800 times the Investment made by 1994 but made up for more than the loss in the other 9!Chris though recommends not to experiment with start-ups but rather focus on well established companies with long runaways of growth and ability to keep compounding capital at high rates.

The Twin Engines are Growth in Business & Market Multples to become 100 Baggers. It’s also about what not to be buying like Utilities and Long Mature Companies like McDonalds and WallMart that will take a lot of years if at all they do become 100 Baggers.

Great Investors do not worry or spend time on what is unknowable or unpredictable like the Fed Rate or US $ or overall state of markets.They focus on great opportunities.

Chris’ study of the 365 Companies that became 100 Baggers from 1962 to 2014  revealed that they spread over several sectors from beverages to retailers to tech firms and took an average of 26 years to become 100 baggers. However the Fastest 10 that became 100 Baggers  did so from 4.2 years to 7.3 years were largely tech,media and pharmaceutical companies.  Also the Median Sales was US $ 170 m while Median Market Cap was US $ 500 m. Price to Sales Ratio was thus around 3 which is not really cheap. The myth that one needs to invest in a tiny company to get a 100 Bagger was dispelled as was not mandatory to look for low Price to Sale Ratio Companies to identify winners.

Chris covers several individual success stories.Monster Beverages stands out. It became a 100 Bagger inside 10 years by 2006 and a 700 Bagger by 2014.In fact one could have even bought it in 2004 and would have got a  100 Bagger. This was despite it being shunned by many well known analysts.One even recommended a Short in 2005 at US $ 6.31. It went on to hit US $ 26 inside a year! One was best served by not following analysts for this Stock! The Dramatic rise was due to brilliant marketing,branding and distribution strategies that surged the topline and led to increased profitability on account of both volume and margin growth. What inevitably followed was a re-rating of Earnings Multiples on Stock Market Quotes. Interestingly Monster never really got very expensive as it’s PE & Earnings Growth were largely in sync year on year.

Amazon is another Interesting Case Study. It was available at just US $ 1.50 in 1997 when it began to be quoted. It became a 100 Bagger inside two years by 1999 when it hit US $ 221 only to be destroyed inside the next two years by the dot.com bust to sink back into single digits by 2001.It took 10 years from there to become a 100 Bagger again. Chris & his team of analysts argue that Amazon yet holds great promise with internet sales rising from sub 2% of retail sales in 1997 to @ 9% currently and potential of 35% seen in the coming years. The Founder,Jeff Bezos is very clear that  value of the business is future cash flows discounted to the present and that focus should be on correct allocation of capital and return on invested capital. On first look it appears Amazon is not doing well till you add back the R & D Expenses that are more in the nature of Investments and can be argued need to be capitalised.For instance 2014 Sales were US $ 89 billion while Operating Profit was just US $ 179 million.However R & D was a mammoth US $ 9.27 Billion and when added back give over 10% Operating Margin. Market Leadership is important says Bezos.

It also covers the rationale of Betting on Billionaries like Steve Jobs of Apple or Bill Gates of Microsoft or Warren Buffett of Berkshire Hathaway and even the new upcoming ones. It’s the argument of Owner-Operators vs Agent-Operators and how the former demonstrate abilities to make deals when others are afraid while the latter are loathe  to spend cash and prefer to take on less debt.

If you believe, like I do, that India stands out currently in the Global Economy as a great Investment Destination for the decades ahead and act on this conviction after applying a lot of the insights from this book ,I assure you ,you’ll be writing out your own 100 Bagger Stories.

A word of caution though …sitting tight can also cost you like once Blue chip Kodak did! & what with disruptive technologies being born every day.

It takes more than just Security Analysis. It takes Conceptual Power in what a Business can achieve & how big it can get.