Sensex had actually opened higher by 294 points today over yesterday’s close of 38107 but swung down 728 points to close at 37673.The morning buoyancy is typical of a pre RBI Rate Cut announcement morning & the huge drop that followed is more in  following sombre global cues & the confirmation that GDP Growth Rate Forecast is now even lower at 6.1% for FY 20

In this context it’s retracted nearly half the 3000 points euphoric bounce back buoyancy from 36000 to 39000 inside days by the historic Corporate Tax Rate Cut announced by the Government on Friday , September 20,2019 .Nifty closed at 11175 today, down 139 points from yesterday. It had rebounded brilliantly from 10700 to 11600  when the tax rates were cut 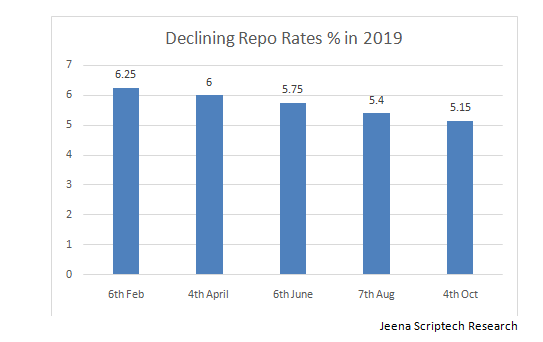 Now with Transmission expected to improve with the linking of lending rates to the repo rates, it is expected that Credit Offtake will pick up , liquidity will improve ,boosting the Investment cycle & stimulating growth

It has forced five Repo Cuts already this year in 2019 thus far . 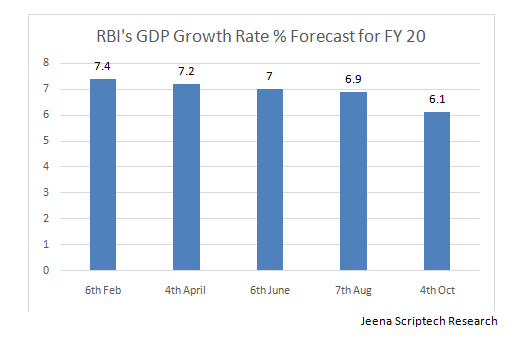 This would indicate a much lower Nominal GDP Growth Rate of 9.5 to 9.6 % from the 12 % assumed in the first week of July 2019 Union Budget Presentation by our Finance Minister, Mrs Nirmala Sitharaman

In an earlier Scrip Standpoint of September 24,2019 , on the basis of the Rs 1,45,000 crs Corporate Tax Loss Sacrifice by the Government that the FM declared when she announced on September 20,2019 a one shot effective Tax Rate Cut from @ 35% to @25% from FY 20 itself , we had assumed a lower GDP Growth of 9.5% & a higher Fiscal Deficit that would challenge us to keep the Deficit at 3.3% of GDP.It would rise to 4.1% unless , of course, the Government compensates this Tax sacrifice through higher Non Tax Revenues as it intends.We had examined in detail the components of this Non Tax Revenue Stream too

“continue with an accommodative stance as long as it is necessary to revive growth, while ensuring that inflation remains within the target”