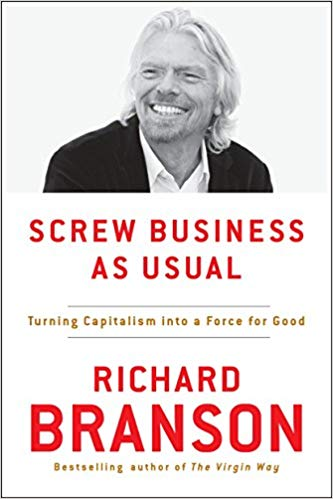 Richard Branson’s  “Screw Business As Usual” ~ Is written in first person in his signature racy style ~ yet found it not as racy and peppy as his earlier books ~ more an encouraging pat for many he believes are making a difference to Planet Earth and the Species, including Humans, on it  and for some a clear ‘plug’

Many of those who read it may view it more like a Compilation Endeavour of Social, Economic and Environmental Issues that dog our World and how these are being tackled by enterprising and concerned Individuals and Entities, including Branson and his Virgin Group

One of his earlier efforts “Screw It, Let’s Do It” changed my view of Richard Branson ~ in fact it charged me up as there were a host of situational similarities I saw between Branson and me ~ for instance both of us have cheated Death more than once ! ~ the only difference is that his adventures over the Ocean &  in the Air were out of Choice and mine out of Chance in Bomb Blasts, Sahara Desert and in a Road Accident!

In the Preface itself of “Screw Business As Usual” one gets a sense of what the Book is all about ~ “It’s at moments like these one realises how unimportant ‘stuff ‘  is” says Branson when he along with Family & Friends that included Kate Winslet of ‘Titanic’ fame, watch as the House on his Necker Island was reduced to ashes in a fire caused by lightening that struck the Balinese Roof ~ Yet the Positive Energy radiates ~ “The future is still ours to hold and share”  says Branson as he rallies all to come around and have breakfast and pitch in with ideas and discuss how to rebuild the House

The Book is all about exploring this next great frontier where the boundaries between work and higher purpose are merging into one,where doing good really is good for business

It’s a Long Read ~ 372 Pages, not counting the 12 pages that include the Preface ~ Seven Chapters that begin with Capitalism 24902 and ends with Power of Communities

The Essence is to turn typical corporate business culture and philanthropy on it’s head, and move away from just the ‘golden cheque’ philosophy to leveraging everything in the business to drive change ~ Capitalism 24902 conveys that every single person on earth is responsible for taking care of the 24902 circumference miles of our planet  ~ it’s not just ‘doing good’ but it’s ‘doing better’ and having fun along the way

Branson relates several situations and endeavours, some of which that his Virgin Group has got involved in to ‘do better’ for the world we live in

Many of these are fascinating :

~ one of which is about an enterprising and concerned Indian, Gyanesh Pandey who creates eco friendly and cheap Electricity from a waste product, Rice Husk for the Villagers in Bihar, India

~ another is of an American of Indian Origin, Jigar Shah who created SunEdison for Solar Energy

~ a third is of  Chris Kilham, an ethobotanist who  New York Times describes as “part David Attenborough, part Indiana Jones” ~ he has gone from being a hippie with a passion for yoga and yogurt to unlocking the health secrets that plants hold ~ one of his early trips was to India to locate exotic plants that were mentioned in the ancient manuscripts ~ he met up with witch doctors, shamans and ordinary people who used these plants as medicines and herbal remedies ~  this resulted in a holistic health course “The Shaman’s Pharmacy’

Of course many of  Branson’s references gave me a sense of ‘plugging’ too, especially of the US Giants Wall Mart and GE ‘s efforts to control emissions !  ~ Let me tell you this ~ USA is one of the biggest polluters and yet  is not a signatory to the UN Climate Protocols of Kyoto ~ The Copenhagen effort too was thwarted being dominated and bullied by USA

An absorbing chapter is ‘Gaia Rocks’ ~ Gaia is the Greek Goddess of Earth and is the name given by James Lovelock to his theory of Earth being alive and therefore a living organism that  can enjoy good health or  suffer disease ~ he relays bad news that the Earth is seriously ill and will soon lapse into a coma that will last for 100000 years! We are responsible and we will suffer, he cries ~ “We are destroying our own home. With every species and habitat we destroy we are upsetting the balance of Gaia!”

….and Branson adds ” So why worry about lemurs, sharks, tigers, elephants and parks when we have so many other issues in the world? How we treat the world is a reflection of our humanity, our intelligence, our conscience, and, ultimately, our very survival. The rapid depletion of our natural resources since the start of the Industrial Age is the root cause of any of the impending environmental issues, such as climate change”

Branson’s  personal mantra for success has always been :

You would ‘do good’ by buying his new book ~ but you would ‘do better’ by perhaps simply borrowing it from a library, like I have done

PrevPreviousBarack Obama, after taking Oath of Office as President of USA
NextTap Dancing To Work by Carol LoomisNext