Borrow and Monetize to Grow 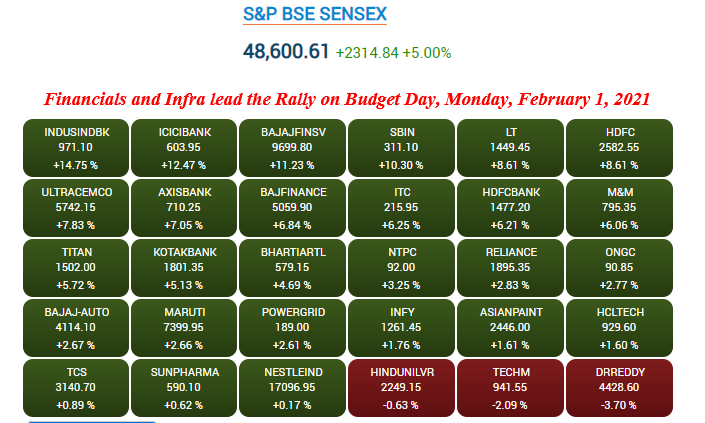 This was the promise made by Finance Minister Mrs Nirmala Sitharaman on December 18,2020.Did she deliver yesterday ?

Well for one,it was a historic paperless budget ! and the Sensex cheered her all the way as the Markets viewed ‘no negatives as a positive’ as she announced a strong Infrastructure thrust to be funded by borrowing and monetisation of assets .There was neither any ‘Covid Tax’ as feared nor was there any increase in Direct Taxation rates.It was a relief rally in a sense for  Markets had turned jittery after a record 50184 level on January 21,2021.Last week Foreign Portfolio Investors (FPIs) had reversed their record inflows of past few months , selling Equity on each of the four trading days to aggregate Rs 6698 crs or US $ 918 m outflows for the week.Budget Day yesterday they were back buying Rs 1494 crs worth again quelling some concern that outflows would continue.

We always re-iterate there are seven ways to raise Capital

Well, Stealing or Theft is certainly not  what a Country can do ! but the other six options certainly can be exercised.Post Budget our FM has revealed that neither raising Taxes nor printing currency was on the table .Her Budget reveals the twin approach of Increased Borrowings and Asset Monetisation to raise Capital .

While resorting to the Borrowing Route would raise concern,it must be observed that in an era of low and even negative interest rates ,India would be able to raise debt at attractive interest rates despite it’s BBB- Credit Ratings by both Standard & Poor’s and Fitch.

In our view the comfort level of the Government for such a huge scale of Borrowings comes from what appears to be an understatement of  both Tax Revenues (underplaying Tax Buoyancy) as well as Disinvestment Proceeds as observed in Receipts (Annexure 3) . The Disinvestment Target of Rs 175000 crs is actually an aggregation of Rs 75000 crs Disinvestment Receipts and Rs 100000 crs through sale of Government Stake in Banks and Financial Institutions.In our View the embedded value of LIC is huge and even a 10% stake sale by the Government will garner much more than Rs 175000 crs

Our major concern remains Inequality and Income Skewness in that all of India will not be carried up together as our Economy bounces back. While thrust on Infrastructure is much welcome, the huge fiscal deficit and thus the unprecedented scale of borrowings raises a Caution if we don’t see the desired outcome in the coming years of Income, Revenue and Employment Generation fall in place. The FRBM had envisaged 3% fiscal deficit this year.With the Economy slowing down even before the pandemic arrived last year, the fiscal deficit was never going to be down to 3% .FY 21 it’s 9.5%.FY 22 it’s targeted at 6.8% and the FM says by FY 25 it should be 4.5%.So a US $ Five Trillion Economy is set back a few years more than by FY 25 .Even a fear of a few cornering  the proposed monetization of assets through disinvestment, privatization and sale of land is not misplaced

Those who will continue benefiting from Stock Market Surges are but a small percentage of the population  who invest in Equities. The Penetration is in low single digit %

Here’s the current reality of our per capita dropping below Rs One lakh .This should revive back in FY 22 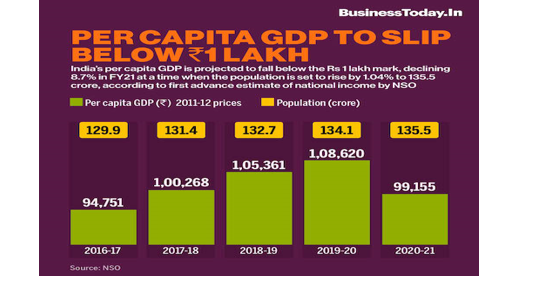 Financials, Infra plays , Metals  are potentially rewarding themes in FY 22 and if you can zone in on which two PSU Banks and General Insurance Company are  to be privatized as announced by the FM in the Budget ,you’ve got winners in your portfolio. Keep a keener eye on Corporate Earnings to confirm a V Shaped Recovery and on FPI Flows which determines market trends .2021 is going to very interesting

This Report is under our free access SCRIP STANDPOINT Module.It is for the personal information of the recipient/reader. We are not soliciting any action based upon it. This report is not to be construed as an offer to sell or the solicitation of an offer to buy any security in any jurisdiction. It is our Viewpoint for general information purposes only. It does not take into account the particular investment objectives, financial situations, or needs of individuals & other entities .We have reviewed the report, and in so far as it includes current or historical information, it is believed to be reliable though its accuracy or completeness cannot be guaranteed. Neither JSAAPL, nor any person connected with it, accepts any liability arising from the use of this document. The recipients of this material should rely on their own investigations and take their own professional advice. Opinions expressed are our current opinions as of the date appearing on this material only. No part of this material may be duplicated in any form and/or redistributed without JSAAPL’s prior written consent. In case you require any clarification or have any concern, kindly write to us at: [email protected]